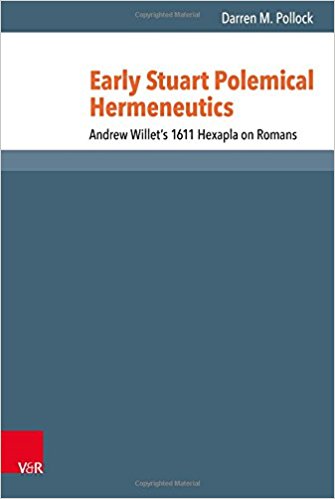 This is a clear and cogent examination of the Romans commentary by Andrew Willet (1561/2–1621), a zealous anti-Catholic whose most influential work was a thorough rebuttal of Roman Catholic theology, titled the Synopsis Papismi. Darren M. Pollock does an excellent job of demonstrating that Willet’s turn to biblical commentary later in his career was by no means a rejection of his earlier polemical agenda, but rather a transference of that confessional battle to a more focused arena. He unpicks Willet’s expert engagement in textual issues, his application of grammatical and rhetorical analysis, the way he associates Roman Catholic interpretations with older heresies, and his polemical use of the early church fathers in a comprehensive look at how this leading Protestant refuted errant interpretations of a key biblical text for the Reformation project.

The fact that Willet’s interpretation of Romans has a polemical edge and is polemically framed is presented as a potentially positive thing by Pollock. It is certainly true that having contemporary concerns or coming to a text with questions outside of its own frame of reference does not invalidate legitimate observations or implications that may be drawn from the text in the process. Just because Willet wanted to demonstrate the perfidiousness of Rome and the errors of her commentators at every turn does not mean he was wrong or that the text does not warrant this. However, there should also be a place for pointing out how this polemical hermeneutical approach can miss the original intent of the biblical text and sometimes wrestle it away from what the author intended; too often historical exegesis has been dismissed because of this without time being given to showing how and why it happens or considering whether it actually has.

I was surprised not to see a reference to the 2013 work of Christopher Cleveland on Thomism (Thomism in John Owen, Ashgate) in this period (especially on page 280), but this is a small omission. Pollock is right that “the field of seventeenth-century scriptural exegesis remains ripe for exploration” (293) and he has given us a good example of how this may profitably be done.

This review was first published in Reading Religion in November 2018, here.