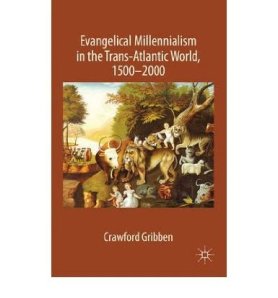 A review of Crawford Gribben’s Evangelical Millennialism in the Trans-Atlantic World, 1500-2000.

Millions of evangelicals continue to expect the final transformation of a slowly dying world, and this book is a great guide to the sheer diversity of their opinions on the subject. Crawford Gribben has already written extensively on early modern and modern eschatology. His work The Puritan Millennium (Paternoster, second edition, 2008), for example, is a must-read for those who are serious about engaging sixteenth and seventeenth century millennial views, and he has also written on the modern penchant for rapture fiction. This current work, however, stretches the net even further, to take in evangelical views of the expectation of an earthly golden age on both sides of the Atlantic over the last five hundred years. Six roughly equal chapters engage with the emergence, formation, consolidation, expansion, content, and dominance of evangelical millennialism.

The book begins, innovatively, with a glossary. These are usually put at the end of course, but here it is vital to be clear on various terms and -isms right from the start. Some of this material is repeated at appropriate points as the book progresses, and Gribben proves an expert commentator on the vast literature and nuanced terminology of both evangelicalism and eschatology. He is a master of every fine distinction and exegetical turn but manages to combine this with a fairly light touch in presentation.

As someone who grew up enjoying Hal Lindsey’s Late Great Planet Earth (and Nostradamus!) but has come to appreciate the amillennialism of the major Reformation confessions, this book is a powerful reminder of just how many different options I could have plumped for and still remained evangelical. It is also a somewhat humbling shock to the system as one realises that great evangelicals of the past have differed so widely on these issues, and the author sees the continuation of this as strong evidence that end-times thinking is a secondary issue in many constituencies today.

Gribben is right to conclude that “the urgent and often political prophetic enquiry of North American premillennialists can seem closer to the puritan legacy than the passivity of many of their amillennial or postmillennial cousins”, but perhaps this should prompt us to action and to recall that one doesn’t have to be wacky to wonder what God is doing in the world, and when it might come to an end. It is a shame that this excellent little tour guide to the last 500 years of writing on this subject is outside the reach of many pockets.

One response to “Evangelical Millennialism”