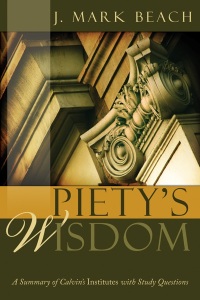 A review of Mark Beach’s Piety’s Wisdom: A Summary of Calvin’s Institutes with Study Questions.

J. Mark Beach has provided us with the best and most trustworthy introduction to what the great David Broughton Knox called, ‘the most important handbook of Christian theology so far written’- Calvin’s Institutes of the Christian Religion. After a biographical sketch of Calvin and some background putting the book itself into historical context, there are twenty-four chapters of about 15-20 pages each which explain and unwrap the Institutes in order. Each one ends with some questions for reflection and discussion, which are well-written to prompt further stimulating conversation and/or thought about the topic.

Dr. Beach is ideally suited to this task, being a pastor himself but also having written at a deep level about the Reformed tradition (his PhD is a very clear and solid work on covenant and grace in the theology of Francis Turretin). This book is not littered with erudite footnotes, however: there are none, and the text only contains references to Calvin or to the Bible, and quotes from both where appropriate. It is not, on the other hand, patronizing, though it assumes little prior knowledge since it was designed for lay education classes (the sort of adult Sunday school that many American churches run). I didn’t find it twisted Calvin into modern theological modes as some commentaries do, and so his thought comes out clearly and not refracted through Karl Barth or some modern Presbyterian agenda. It’s hardly a popular-level romp either, and there are no pictures!

It would be ideal for study groups who could be set a portion of Calvin to read and use this as an expert guide to that (or indeed, the leader alone could read this to help guide a group which just reads the Institutes itself, or people can just read the synopsis here instead of Calvin). It could also be profitably used by ordinands or ministers to help them get to grips with the Genevan Reformer’s thought.

Others have attempted something similar: Niesel’s and Wendel’s books on Calvin give an overview and commentary on the Institutes, and T.H. L. Parker’s introduction to Calvin’s thought also does the same. Anthony Lane’s recent Reader’s Guide to Calvin’s Institutes is not quite like this book, however, being a shorter and more suggestive roadmap rather than an attempt at a complete synopsis and study guide. So Beach’s look at what he calls ‘one of the magnificent classics of Christian literature’ is a significant achievement and a useful addition to the ever-growing library of books on Calvin, and perhaps one of the most beneficial because it is actually readable and employable in a church context amongst motivated learners. It even stands alone as a manual of Reformed theology itself, and could be used without reference to Calvin’s original, for those who don’t want or need to go back to the sixteenth century.